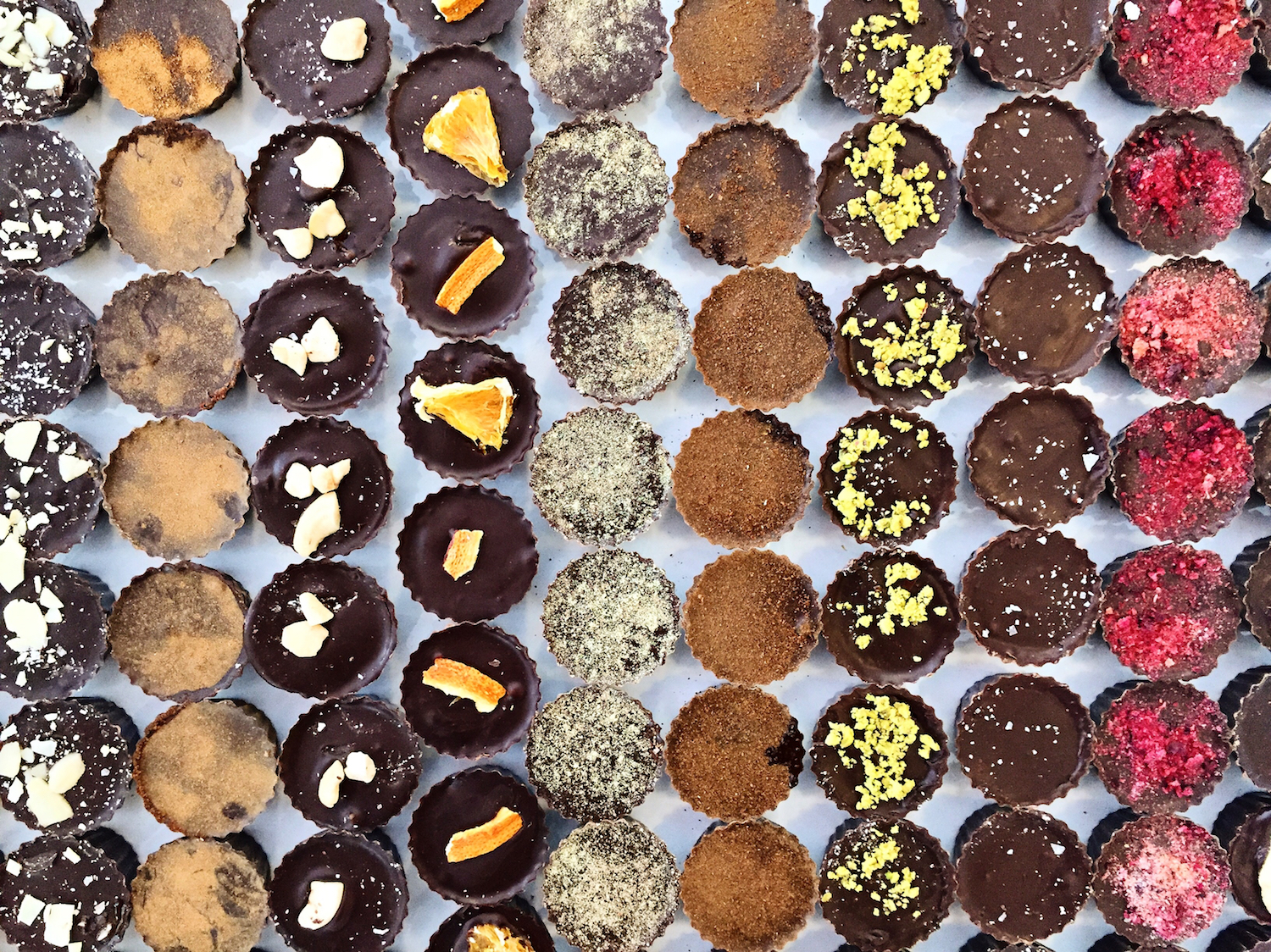 Eat Chic began in the UK before migrating to NYC where Lotta Andonian has created a cult following for her twist on an American fave: the peanut butter cup.

Who Is Eat Chic?

Reese’s peanut butter cups (especially the holiday eggs and the trees, holler!) are my favorite candies of all time. That is, until I tried one of Lotta Andonian’s Eat Chic chocolates. OMG, you guys. They are so good. Like Reese’s on steroids, or rather, Ritalin. More refined with grown-up touches like Maldon sea salt and fresh ground nut butters that go beyond peanut: almond, hazelnut, cashew. Lotta says she’s got 30 flavors on rotation at any time, and each one is a special piece of magic. My latest craving is for her pumpkin spice dark chocolate. #swoon

Lotta was inspired to make peanut butter cups when she was working in London because her co-worker couldn’t stop raving about Reese’s, a new appearance at the corner shop under their office. She tried her hand at making better ingredient, homemade cups and the office went wild. Eat Chic was officially born.

Lotta built up a solid clientele in London that included some wholesale heavyweights, but eventually made the tough decision to re-launch her company stateside. She says it’s been more fun to play with flavors in the US where peanut butter cups are second nature as opposed to the UK where she had to beg people to give them a try. (Sidebar: what is going on Europe?! Peanut butter cups are basically god’s gift to humans. Get on board!)

“There’s a lot of romanticism in having your own business, and it’s really difficult. My boyfriend would never put himself through what I’ve been putting myself through.” – Lotta Andonian, founder of Eat Chic Chocolates, on entrepreneurship

In this episode, I talk to Lotta about the decision to move her company across the Atlantic, why pop-ups are a great way to test out a concept and the differences in the US/UK markets. She also gives me a crash course on tempering chocolate, some advice for building a social media following fast and the resources that helped her get going.

Resources mentioned on the show*:
Chocolates and Confections: Formula, Theory, and Technique for the Artisan Confectioner by Peter P. Greweling and The Culinary Institute of America (CIA)
The Vegan Shop-Up, NYC’s only vegan market
Podcasts: From Scratch, How I Built This, Girl Boss Radio
Born a Crime: Stories from a South African Childhood by Trevor Noah
Born to Run: The Bruce Springsteen Biography
#GIRLBOSS by Sophia Amoruso
The Everything Store: Jeff Bezos and the Age of Amazon by Brad Stone
Steve Jobs by Walter Issacson

SAVE 15% ON ANY EAT CHIC ORDER WITH CODE “CHICTREATSWCMT”!

The intro music for the We Could Make That podcast was created by Brooklyn-based artist, Jenna Kyle. You can check out her new (non-podcast) music on Soundcloud.
*The links to Amazon in this post are affiliate links, which means I will probably get a few pennies if you buy by clicking from here.
Tagged: almond butterbrooklyncandieschocolateeat chic chocolatesentrepreneurshipfoundergluten freelondonlotta andonianpeanut butterpumpkin spicetreatsvegan